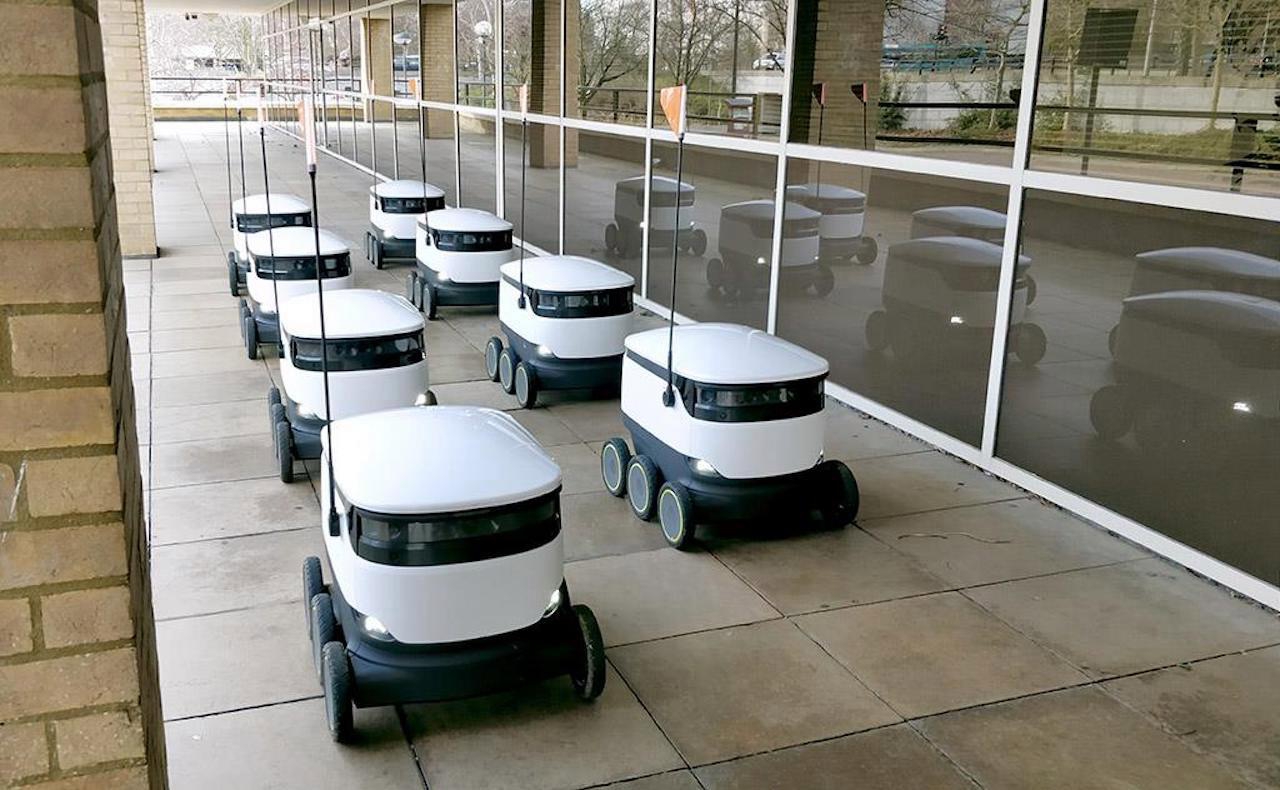 Lots has happened over the last few days. At Metrolla.com we have been keeping up with the latest trends in the market so that we can better inform you about how our products fit within the ever changing landscape. Let’s not waste any time and dig right into the weekly digest.

Autonomous delivery startup Nuro  has been granted a permit to begin driverless testing on California’s public roads, paving the way for the company to roll out commercial operations throughout the state. While 65 companies have an active permit to test autonomous vehicles with a human safety driver, Waymo, and now Nuro, are the only companies allowed to operate driverless vehicles on California’s public roads. However later in the week it was stalled because the coronavirus displaced the employees who would need to deploy the robots, according to Axios.

Karma, the automaker announced it has achieved L4 Autonomy with its Electric Van platform. MotorAuthority reports the automaker has the flexibility of Karma's E-Flex platform doesn't end there. The company also teamed up with Chinese self-driving car startup WeRide to install a self-driving system whose capability is rated at Level 4 on the SAE scale, meaning the vehicle should be able to handle itself on its own for extended periods though only within certain situations. The WeRide system's computer processor is Nvidia's powerful Drive AGX Pegasus which can handle 320 trillion operations per second.

In China, AutoX has set up the largest self driving factory in Asia. According to the South China Morning Post: Chinese autonomous driving start-up AutoX has launched a “gigafactory” in Shanghai, which it says is the largest data hub for self-driving car data in China and the biggest robotaxi operations centre in Asia. The 80,000 square feet Shanghai RoboTaxi Operations Center houses tools for operating a large fleet of self-driving cars

Meanwhile back in the USA Telsa has stated it is still on track to produce autonomous robotaxis according to AutoEvolution Earlier this week, Elon Musk solved the riddle of the cabin-facing cameras. The cameras would serve to record inside a cabin to see if a passenger of a robotaxi caused damage during a driverless ride. Asked whether robotaxis would become reality by 2023, Musk delivered this piece of good news. “Functionality still looking good for this year,” he wrote. “Regulatory approval is the big unknown.”

Uber who has been mostly silent through the Autonomous Taxi revolution has come out saying Their AI is able to predict the flow of traffic with incredibly high accuracy. According to VentureBeat researchers at Uber’s Advanced Technologies Group (ATG) propose an AI technique to improve autonomous vehicles’ traffic movement predictions. It’s directly applicable to the driverless technologies that Uber itself is developing, which must be able to detect, track, and anticipate surrounding cars’ trajectories in order to safely navigate public roads. It’s well-understood that without the ability to predict the decisions other drivers on the road might make, vehicles can’t be fully autonomous. Uber understands that better than any company in the industry as they have had multiple cases where their self driving truck and cars have killed people.

At Metrolla.com they have been working on streaming Lidar and video solutions to allow for a Vehicle to Cloud and Vehicle to Vehicle communication solution. Metrolla is developing a way for manufacturers and fleet operators to continuously adapt their fleets regardless of make or model. The ability to adapt routes and offload sensor data will allow for improvement of fleet operations, allow for oversight of liabilities and assets and bring real-time situational awareness to companies.

Due to the pandemic COVID19 is proving to be a catalyst in the need for contactless delivery and in many parts of the world right now self driving vehicles are delivering much needed medical supplies and transporting patients without the need for personal protective equipment. According to TechRepublic the demand has surged for drones and vehicles.

In Florida Jacksonville Transportation Authority (JTA) has partnered with autonomous shuttle company Beep and self-driving system creator NAVYA to be used by the Mayo Clinic. They're able to safely transport coronavirus testing kits from a nearby drive-thru testing facility to their lab and are a safer way to avoid human contact, in a time when social distancing is essential to slowing the spread of COVID-19.

According to TechCrunch Starship Technologies  has launched a robot food delivery service in Tempe, Ariz., as part of the autonomous delivery startup’s expansion plansIn Tempe, the delivery service will initially employ more than 30 autonomous, on-demand robots between 10:30 a.m. and 8:30 p.m. daily in a geofenced area that includes several restaurants and a residential area. Additionally, according to Futurism, they already have businesses signed up.

At the same time in the UK Spaceship Technologies is running food delivery robots in partnership with deliveroo. The Guardian states Touchless food delivery is exploding during the crisis. In fact it might even seem that Starship is cornering the market with its testbeds like Fairfax Virginia where more delivery is underway.

Joining the food delivery and supply delivery is OptimusRide who pivoted their self driving operations to food delivery as the demand increased. They are also working on a medical personnel transportation solution. All in all,  It is seeming that Food and Supply Delivery is becoming a trend in autonomous delivery..

According to PopularMechanics, Elon Musk claims that Teslas are superhuman, being able to react in ways that are faster than people would be able to react. Elon Musk as also restated his claim that LiDAR is a losing technology and his focus is on streaming video technology using video plane analysis to determine how far away an object is and react based on what the machine learning algorithms interpret from the computer vision video stream. Forbes has called Elon Musk’s superhuman commentary a False Narrative as these same principles apply to all self driving vehicles. The underlying result is the same however Humans are bad at Driving and the numbers show.

In Hong Kong, an automated machine sprays a hydrogen peroxide solution to disinfect surfaces. The regular cleaning staff is still on the job and uses the Vaporized Hydrogen Peroxide Robot to disinfect small spaces that are difficult to reach by hand. A custodian can program the robot to operate automatically by loading a floor plan of the designated area or remotely control the robot with a mobile device within a distance of 20 meters. The company estimates that it takes about four hours to complete the cleaning of an 8-car train in automatic mode.

In India the EconomicTimes reported on the benefits that self driving cars will have on drunk driving. Leon Booth, lead author and research associate in School of Psychology at Curtin University, said, "By removing the need for a driver, the autonomous vehicles were expected to substantially reduce rates of drunk-driving." However, the study also claims that the benefit might come with an unintended consequence in the form of binge drinking, as the autonomous vehicles offer more convenient transport options.

Zoox settles lawsuit by Tesla that alleged theft of trade secrets. In a statement Tuesday, Zoox said it will make a monetary payment to Tesla, the amount of which was undisclosed, and undergo an audit to make sure none of its employees have retained or are using confidential Tesla information. Following the lawsuit and with COVID impacting business Zoox cut 10% of its workforce.

In addition to the suit filed against Zoox, Tesla filed a separate suit lawsuit against an engineer working at Chinese electric vehicle startup Xpeng Motors for IP theft. Tesla claimed that Xpeng employee Guangzhi Cao stole IP related to Tesla's autonomous driving system. Prior to joining Xpeng, Cao was a former employee of Tesla's Autopilot team and one of only about 40 people said to have access to the software's source code, Tesla said. The electric vehicle maker said that Cao quit "abruptly" on Jan 3, 2019 to take a job at Xpeng.

According to the Register Velodyne is being sued for wrongful termination by its employees. Velodyne cited coronavirus as the reason for needing to lower headcount. According to The Register Velodyne Lidar fired more than 33 per cent of its staff working at its headquarters based in San Jose, USA, we're told. The layoffs came as a shock to more than 140 of its employees, who were only given one day's notice, it is claimed.

Patent wars heat up as many major players innovate and try to stake claims. According to EconomicTimes India Patent filings and grants in India are dominated by foreign applicants: they filed two-thirds of patent applications in 2018-19, and got four-fifths of grants, according to the Office of Controller General of Patents, Designs and Trade Marks. Among Indian companies, TVS Group, Tata Motors, and M&M have been among the top Indian applicants for patents whereas Globally though the top ten innovator list is dominated by Japanese auto majors with the likes of Honda and Toyota featuring prominently.